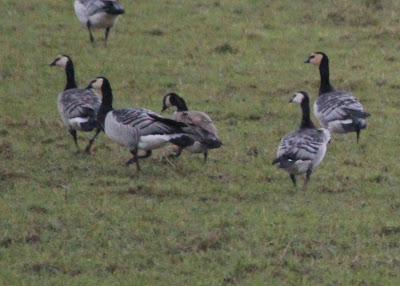 This image was sent through by Miriam Parkes taken last week of one of the Cackling Geese amongst the Barnacle Geese that she had seen when she was over.

Last night on our way to Bowmore, we had a Barn Owl out on the wing at Pennycraig, earlier on we had a Red Deer stag resplendent with antlers at the roadside at Rockside and coming home there were 3 Roe Deer at almost same place.

Today Louise had 8 Bullfinches up towards Loch Corr, 4 males and 4 females. Also today we had an Iceland Gull at "smelly corner", with the Brent Geese present at Blackrock. A Buzzard was on the thermals above the raised beach along from Uiskentuie, and another Buzzard on the ground just after Foreland, as were a couple of Fieldfare. There were a couple of Blue Tits on the road there too, I often think them perched on a branch rather than on a road! By the way the wind was up the other night after the Fulmars left but I do not sure what speed it was as Mike' weather station came unstuck last week with the storm/ lightning....
Posted by Ian Brooke at 09:34