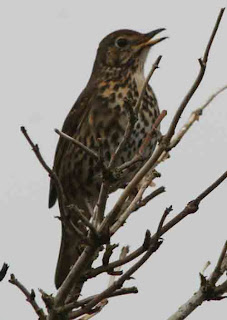 After a dull start to the day, the weather picked up mid morning, and so allowing this Song Thrush to give us a tune!
I spent some time over at the hide at Gruinart and enjoyed the Pintail doing their synchronised swimming routine, other ducks present were Wigeon, Teal, Mallard, Shelduck and Shoveler. A pair of Red breasted Merganser were also seen. Later on a Hoodie Crow was seen briefly before being sent packing by several Lapwing. Around the viewing platform, in the flowering Gorse there were several Robins singing and also Wrens being very vocal too. Up at Ardnave, I had an odd sighting amongst a flock of Barnacle Geese, I had to check twice, but right enough there were 2 Greater Black backed Gull with them. On my return the Geese had flown away, but the Gulls were still there! The Canada Goose was with the Barnacle Geese at the back of the farm steading at Aoradh. While coming home over the moor, we had a really close view of a male Hen Harrier, flying away from us. IKB
George reported in today, having a Goldcrest at his house at Bruichladdich, while Michal had 8 Whooper Swan flying North up Loch Indaal while waiting at the Airport. GJ &MS
Posted by Ian Brooke at 11:44