A much more pleasant day today with light winds, virtually no rain and good sunshine, at least during the morning.

Following on from the discussions about odd-looking Whooper Swans and reports of multiple Lesser Scaup on Loch Skerrols, today’s blog continues in a similar vein.

David Dinsley provided some further thoughts, insights and some photos on the subject of strange swans. He says:

We can’t rule out the possibility of Mary having spotted a Bewick’s Swan but without a positive ID, it’s hard to say for definite, but it's possible she had an encounter one of these strange looking Whoopers.

Up here on The Oa, last October, we all got a little excited at the prospect of a Whistling Swan on the reserve. Instead, we had two aberrant juvenile Whoopers with a small group of standard looking birds, these individuals were noticeably smaller with much darker nebs and in the field, they cut a different profile amongst the rest of the Swans - smaller and with a shorter neck.

Reaching out to some connections I had in the world of wildfowl, these birds are recognised as potentially the result of inbreeding and at least three pairs have been observed in the past elsewhere. 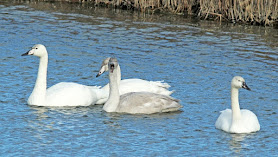 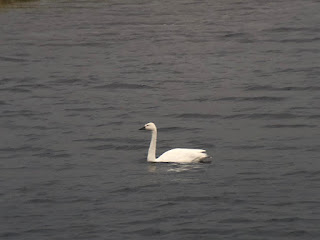 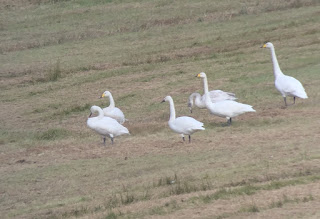 Photos of the aberrant Whooper Swans The Oa, David Dinsley.

The report of Lesser Scaup comes from visiting birder Adam Wilson and 4 were reported this morning via Birdguides – all young birds: 3 male and 1 female. Adam has photos that he will be able to supply when home next week. Today he was on Jura where he reported a possible 2 calendar year American Herring Gull.

Back down to earth with species providing no identification problems, Gary noted a couple of White-tailed Eagles upsetting the geese on Loch Indaal at Bridgend.