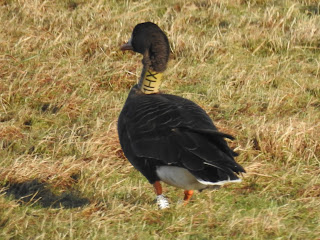 One of the two Whitefronts, which I managed to take an image of, that were round at Ballinaby yesterday. I went round again this afternoon, but the geese were away at the far end of the field and the light was poor... Coming home I had a ringtail Hen Harrier fly across the road as I approached Saligo Bay and then a few moments later just before the Coastguards' cottages, another ringtail flew in front, doubt if it was the same bird... Over at Ballinaby, there were also 15 Linnets present. Earlier this morning, down on the grass reseeds at Kilchoman, I had counted 39 Chough probing around looking for some food.

You may already know about this bird, but it was caught at Ballinaby in December 2012 and has been seen there each winter since.
Malcolm