Yesterday, Gary had been out with some clients, a great day to be out plus they had some great sightings thrown in, so here are some of their best sightings. At Coal Ila, they saw a couple of Otters out in the Sound of Islay, what a start... While they were there a White tailed Eagle and then a Golden Eagle were also seen, along the road and over the hills behind Ballygrant, another White tailed Eagle was present. From Blackrock, out on Loch Indaal they had seen a Red throated Diver, only 5 feet from where they were parked up, GNDs, Common Scoter, 3 Long tailed Duck, Slavonian Grebe and the flock of Scaup as well. Along at Rockside they had 2 small Canada Geese and also the larger Canada, Todd's goose amongst the Barnies and Whitefronts present there. 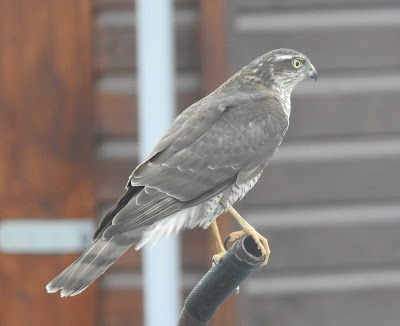 This morning, Gary dropped in for a cuppa and a natter, who else came by but this female Sparrowhawk who happily sat on the old sack barrow outside the kitchen window while I managed to get the above, could be a bit clearer but taken through the double glazed window. Earlier on,  Gary had seen the Snow Bunting down on Machir Bay and also found a dead Common Gull with BTO ring on... Mandy had seen some Whitefronts over at Carnduncan with collars fitted but too far off to read, she has also had a couple of Greenfinches on her feeders at Carnduncan itself.
Posted by Ian Brooke at 11:39