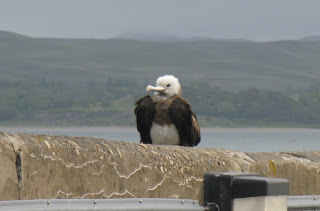 This image was shown to Mary at Gruinart at lunchtime, taken at Bowmore Harbour this morning. Well it is an Ascension Frigatebird, only the second sighting in the UK, the last was seen back in 1953. The image above was taken by Jim Sim and his family from Renfrewshire. The big twitch will now be on to find it as it took off around 9am, in which direction it flew I have not heard...Anyway, if we hear of any further news, we will keep you posted! Late this evening, just had an e mail through saying that the bird had seen at 4pm  flying over Carnain. Apologies in putting the wrong date on the earlier entry. I have been out looking for the bird this evening, but no joy, suppose that's birding for you.... The last bird seen was found in a poor state of health on Tiree.
Posted by Ian Brooke at 08:10

Wow! What a bird!