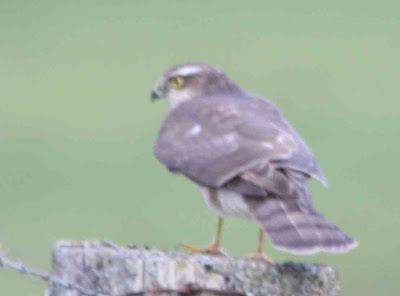 Possibly not the clearest of images, but this female Sparrowhawk was momentarily on top of a straining post over towards Coull Farm this morning. You do not always appreciate the size of some birds, and this was no exception in that it was on this post which was not much more than 8" in diameter! It took off after a Pheasant, with no luck!
There was a small group of 22 Whoopers flying West along Loch Gorm, I had expected them to land there but they did not. Onto the lochans at Rockside and they just kept flying, so I thought they might land on the barley stubbles, but instead they kept on going out to the sea and no doubt on directly to their wintering grounds in Ireland. Malcolm yesterday had 17 at the head of Loch Indaal, with the Arctic Tern still present at Bruichladdich itself.
New folk in at the cottages had a Kestrel over Loch Gorm, both Teal and Wigeon on Loch Gorm and the lochans as well as a Rintail Hen Harrier on the wing.
Posted by Ian Brooke at 12:06