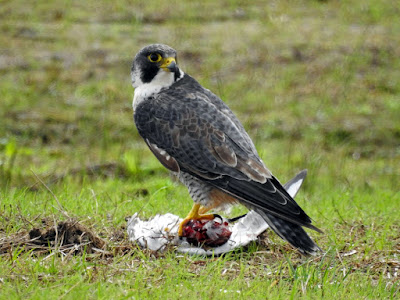 Jim Dickson sent through this image of a Peregrine on a kill, taken at Gruinart on Sunday, thanks Jim.. Yesterday, Dave down on the Oa saw 4 Goldcrest, a Whitethroat and 2 Sparrowhawk. Today, Dave had a Wheatear and also reported that "finch numbers" were on the increase, with mixed flocks of Twite, Linnet, Goldfinch, Greenfinch and redpolls seen on the bird crops on the Oa. Bob this morning had seen the American Wigeon along with 63 Wigeon and 10 Mute Swan up on Ardnave Loch.. On Bolsay Moor, he had a female Sparrowhawk mobbing a ringtail, another along at Blackpark was having a go at 2 Hoodies and up at Ardnave, a small male Sparrowhawk was getting mobbed by 30 Linnets! This afternoon Jim Dickson saw the really elusive Rose coloured Starling down close to the Coastguards. Earlier on, Jim had seen a Common Sandpiper at Gortan, on Loch Indaal off Bruichladdich, 9 Red throated Divers and a GND there as well off Uiskentuie, 53 Common Scoter were present.
Posted by Ian Brooke at 12:15

Hi friends I found an awesome way to get weekly brief traffic report to my website through, http://freeanalyticreports.com