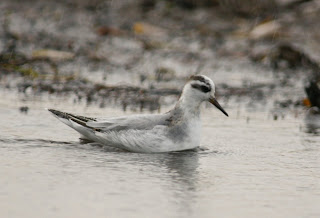 This is one of the Grey Phalarope's that was seen at the weekend. This one was at one location, while another 2 were round at Port Charlotte.
Talking of Port Charlotte, and an elusive Waxwing was seen down there this morning by Jeremy Hastings and Carl Reavey.
Amongst the waders seen at Gruinart today were 2 Greenshank and a flock of around 100 Sanderling flew past. Out from Ardnave point there were a pair of Slavonian Grebes.
Our friends gave me report of their sightings today as follows. "At Saligo there was a flock of over 200 Golden Plover feeding in a wet field together with a large number of Starlings, when they all took flight on the appearance of a ring tailed Hen Harrier. At Sanaigmore, the only bird to be seen was a Great northern Diver. The shore at Bruichladdich, was quiet with only a few Ringed Plover, but just offshore was a Red throated Diver."
Posted by Ian Brooke at 12:20