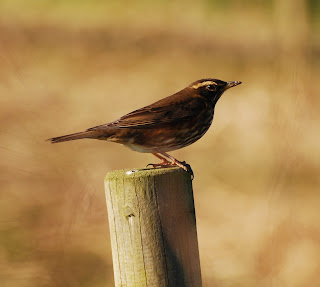 What a day for October, the gritters have been out, gritting the roads to prevent ice, and plenty of dirty snow and hail showers thrown in for good measure. In fact the snow on the Paps of Jura, and also the hills behind Bowmore had their winter coats on all day, quite often it has gone by lunchtime, on the odd occasion when we get snow.
Michal had been out down on the RSPB Oa reserve today, and had captured this Redwing. There was a flock of around 70 birds there, along with a few Fieldfares. The flock of over 100 Twite still remain, as well as some Linnets. There was both a male and female Hen Harrier out hunting, and also he also saw 2 Golden Eagles and a Peregrine. MS
David Goodwin, a visiting birder who has visited regularly over the past 25 years, e mailed to say that he had seen 2 immature Grey Phalarope in the bay at Port Charlotte on Saturday morning.
While out in Port Charlotte with friends earlier this evening, there was a report of what could possibly be a Red breasted Goose, so something go and look for tomorrow! Coming home, we were pleasantly surprised to see 3 Barn Owls out hunting a different locations. The Swallows were seen in Port Charlotte again today and another couple were seen at Port Ellen too.
Posted by Ian Brooke at 14:06