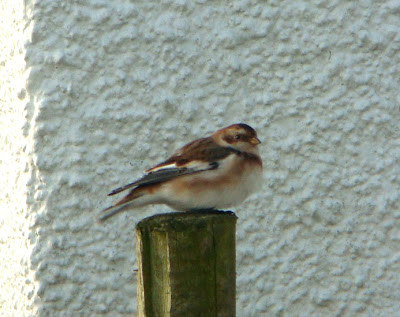 This Snow Bunting was taken by Mary this morning down at Portnahaven, after it had been in for a feed at the bird table. It has been present since the gales last weeks coming in with the Chaffinches to be fed! Mary had a count of over 5,000 Barnacle Geese on the reserve at Gruinart through the week, along with 300 Greenland Whitefronts and 150 Greylags. The leucistic Barnie is still up at Ardnave, over at Killinalan the numbers of geese were not as many but Mary reckons that there has been a juv. Golden Eagle over there! On her way to work, most mornings she has been seeing a Barn Owl out hunting, just she was coming out of Portnahaven. Yesterday, Mary had carried out a farmland bird survey and noticed more Blackbirds around, the largest flock was 13 along with 3 Redwing. Quite a lot of Reed Buntings were seen too, the largest count being 23 at Moulin. Today James had 7 Whoopers at Gruinart, and also 3 different Hen Harriers, 2 females and 1 male. Below the visitor centre there were 14 Long tailed Tits present, as were 4 Red Deer stags. Peter had a Slavonian Grebe in Bowmore Harbour, almost in summer plumage and a further 6 out on Loch Indaal itself. Yesterday Malcolm had a 1st winter Iceland Gull over on Jura.
Posted by Ian Brooke at 11:32