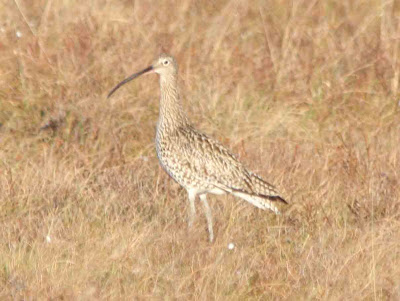 This Curlew was over on the moss round at Ballinaby this evening. Down at Rockside there were 38 Greylag Geese on a grass field, 10 on a Barley field at Ballinaby and a further 10 down on one of the lochans beside Loch Gorm, and these were all in groups rather than being paired up!
Also at Ballinaby were 12 Greenland Wheatear and later on were some Northern Wheatear too. There were still 18 Golden Plover to be found in the furrows of a ploughed field.
I have not seen Barnies of late or any Greenland Whitefronts, so perhaps they have all moved on now. There are still no House Martins to be seen here at home, as of yet. We were also commenting on the low numbers of Stonechats.
Posted by Ian Brooke at 13:18