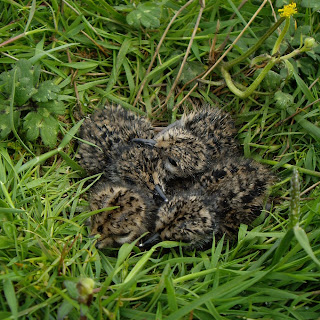 Michal got these young Lapwing chicks, just a few hours old this morning, but for how long will there be 4 of them? MS
The other day, James and Andy had a probable 1st summer, non adult, White billed Diver flying far out off Nave Island. At Ardnave itself, Catherine has been seeing terns, both Arctic and Little and a Sandwich Tern too. There was also a group of 35 Dunlin. Back down on the Reserve at Gruinart, in the new cattle shed at the farm steading, Catherine had a young Tawny Owl. Meanwhile out on the Reserve itself, James has seen another pair of Short-eared Owl, and 2 Redpoll while on the floods there was a Teal out with her brood. The Stoat was in his garden again! James also saw the pair of Spotted Flycatcher in the wood today as well as 2 pair of Goldcrest with young. A male Gadwall was on the floods as were 3 Dunlin. With this good spell of weather recently, the Marsh Fritillaries have been observed over the Rhinns in good numbers. Andy reported in to say that he had heard 2 separate Wood warblers, one at Kildalton Wood and the other in the woodland around Ardilistry. He also had really close views of 3 Basking Shark off Texa this evening, and also he told me that there were a lot of Manx Shearwater flying west at the same time. JRH, CF & RAS
Posted by Ian Brooke at 13:10

That has to be the picture of the week, brilliant!

Fingers crossed they all make it!