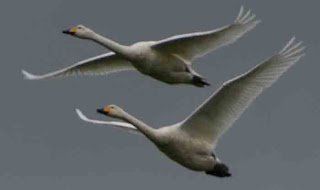 This is an image of 2 Whooper Swan,taking off from Loch Gorm. Unfortunately, I was unable to get an image of the group of 150 over at Gruinart before they left! MAB


An otter was obseved at Bruichladdich, the first since the 1st of August. Out on the Loch there were 5 Red throated Divers, while inland there were 8 Snipe and 4 Teal on the Pools. GJ


A brief summary of the Corncrake survey for 2007.......
The survey of Corncrakes on Islay in summer 2007 showed a further increase in numbers from previous years. This year, the total number of calling males was 69, which is 10 more than 2006, and 17 more than in 2005. The majority of the calling males were found on the Rhinns of Islay, with the highest concentration of calling males was again on Gruinart Flats, there were 16 calling males on the RSPB Loch Gruinart Reserve.
Thanks to the Corncrake Initiative Scheme and the willingness of the farmers, most of the silage fields adjacent to where calling corncrakes were heard, were either cut after 1st August, some of them even after 1st September, with most fields being cut in a corncrake friendly manner, i.e. from the centre out, rather than from the outside in. By cutting in this way, this should help the survival of the chicks as they would tend to go to the outside edges of the field being mown, which hopefully will increase the number of corncrakes on Islay in future years. MS

A Merlin was seen over the moorland on Friday, with a single Snow Bunting also seen in the same location later on that day. MS


On Saturday morning there was another noticeable passage of around 4,000 Fieldfares over the South East of Islay, while over on the East we are only seeing the odd one or two, as well as a few Redwing. RAS
Posted by Ian Brooke at 00:51